We first started using the Wasp Repellent in the summer of 2017. Since then we have never had to worry about wasps. We just leave a jar open on our table all the time and hey presto - No wasps.
Mr Jones, Javea

What a great product. Just take the lid off and thats it.
Mr Langham, Calpe

We have been using Pests R Us Spain for years now and I have been very happy & grateful for their expertise and service.
Services
Emegency Call Out

Same day and weekend service is available at a premium.
Home and Garden

We can deal with all house pest problems including bugs, fleas, beetles and grubs in Lawns
Wood Problems

Anything wood. We handle all wood problems, (woodworm, beetle, termites etc), including a wood spot repair and restoration service for cherished furniture.

The Wasp Repeller for getting rid of wasps outdoors - have a few jars handy, ready for when you need them - IT WORKS !!! 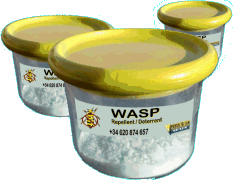 Until now, getting rid of wasps from outdoor eating areas was a bit hit and miss.

Trying to eat breakfast or have a BBQ was almost impossible due to the large numbers of wasps that appeared.

Now with our wasp repellent you can have wasp free dining outdoors. Throw away your candles, coils, sprays and use our Wasp Repellent jars. Contains powder that wasps hate the smell of, and deters them from the immediate area. And any wasps that do venture into your protected area soon give up and fly away.

WATCH IT WORK - If you have a wasp hovering around your plate at your outdoor eating area, just take the lid off the wasp repellent jar and place it near the plate. The wasp will smell it and immediately fly away. TRY IT - IT WORKS*. And if you find that the coverage is not enough, then just place another one at the other end of the table.


This has to be the easiest way of getting rid of wasps, just remove the lid and leave the opened jar on the table. No lighting of coils or candles and child/pet safe (no flames). This product is not available in shops.

We have all heard about home remedies - decoys (making fake wasps nests), using pepermint oils, warm soapy water, choosing plants that repel wasps, but they are all a bit hit and miss. Maybe that's because there are many types of "wasp" in Spain. But one thing is for sure... We have been dealing with wasps for years and the chemicals in this wasp repellent really do repel wasps - THEY HATE IT ! .

* If the area you are treating is more exposed to winds etc or you have a larger area to clear then use more jars. On average, 3 jars should last all summer.

maybe to as little as a few weeks.

Under normal usage a jar will last all summer.

Contents are normally white repellent powder with a blue activator.

Contents turn completely blue when repellent is used up.

Replace lid when not in use or not required.
* This will also reduce the products useful life.

Avoid directly inhaling vapour. do not eat and avoid contact with eyes.

keep away from foodstuffs, children and pets.


fascinating facts about wasps from Pests r Us, the natural wasp repellent

bad things wasps do – but don’t kill wasps, make them go away

wasp stings when and why you get a wasp sting

how to avoid a wasp sting

how to know if there is a wasps nest nearby

how to prevent a wasp nest in your loft or garage

how to get rid of a wasps nest

providing a moving buffet for wasps

how to get rid of wasps

territorial defence of their wasps nest

what do wasps eat?

wasps recognise each other

have a wasp for a pet

wasp the novel the wasp woman

Web design from an original idea by: Wordpress Templates Provider